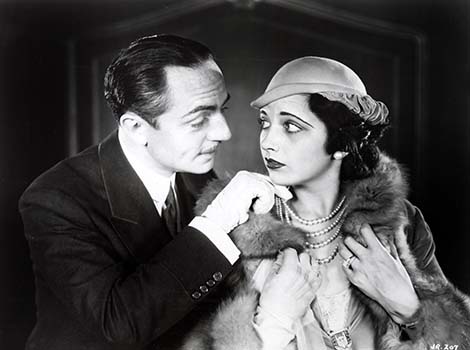 William Powell’s justly famous on-screen partnership with Myrna Loy has overshadowed another great team-up, his six pairings with Kay Francis. Starting at Paramount and moving to Warner Bros., they were the last word in sleek sophistication. Since all their films together were made before strict Production Code enforcement, they’re also surprisingly adult. In Jewel Robbery—their fifth film together, now celebrating its 90th anniversary—she’s a bored Austrian baroness who treats her string of lovers as expendable. When Powell robs her at a high-tone jewelry store, sparks fly, and the race is on to see who will seduce whom first. Francis, one of the screen’s great clothes horses, wears a series of revealing gowns. That’s part of the film’s pre-Code charm. It also makes light of her marriage and shows Powell pulling off his heist by getting the shop’s owner and security guard high on marijuana. It would all be inconsequential if the stars did not provide a human quality to underscore their brittle sophistication, with Francis’s great dark eyes suggesting it took a lot of suffering to get that much class. (d. William Dieterle, 68m, 35mm)