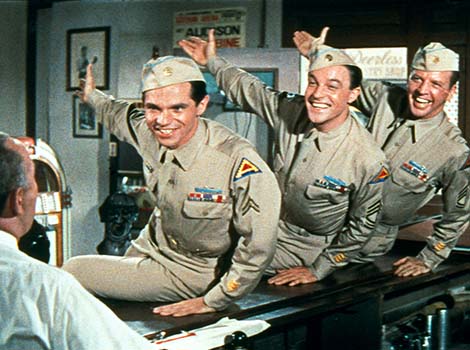 Reunions on-screen and off- are at the heart of this surprisingly adult musical from MGM. Codirectors Stanley Donen and Gene Kelly had previously teamed for On the Town (1949) and Singin’ in the Rain (1952), written by Betty Comden and Adolph Green. In fact, their third and final collaboration was originally intended as a sequel to On the Town, showing what happened to the sailors played by Kelly, Frank Sinatra, and Jules Munshin after they left the service. When Sinatra and Munshin proved unavailable, the script was reshaped to feature three World War II GIs—fight promoter Kelly, ad exec Dan Dailey, and greasy spoon owner Michael Kidd—who reunite ten years later, only to find they now have nothing in common. Before they can part, one of Dailey’s colleagues (Cyd Charisse) decides to exploit their reunion with an appearance on a talk show she produces, setting the stage for a hilarious send-up of TV. Donen and Kelly used the new CinemaScope format to stage numbers with split screens and clever dance routines like Dolores Gray’s “Thanks a Lot, but No Thanks.” (d. Stanley Donen & Gene Kelly, 102m, 35mm)