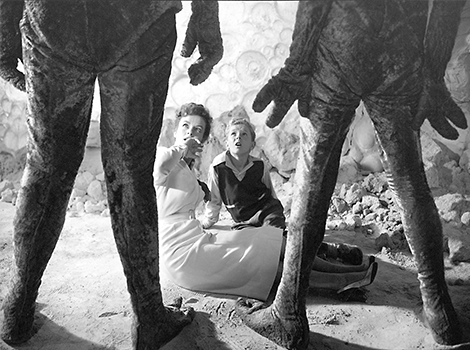 William Cameron Menzies had already distinguished himself as an Oscar-winning designer and the director of H.G. Wells’s visionary Things to Come (1936) when he helped turn this low-budget science-fiction movie into a cult favorite. His unique design style, marked by distorted sets and low-angle shots, sets this film apart from other 1950s fright fests. Rushed into theaters before producer George Pal’s The War of the Worlds (1953), Invaders from Mars was the first alien invasion film shot in color. Its tale of a child (Jimmy Hunt) who witnesses a flying saucer land near his home and then notices odd behavior from his parents and neighbors inspired countless other films, from Don Siegel’s Invasion of the Body Snatchers (1956)—another picture in which people become convinced their loved ones have been replaced by soulless lookalikes—to Don Coscarelli’s Phantasm (1979) and Brad Bird’s The Iron Giant (1999), whose directors saw Invaders from Mars as children. Prepare to be haunted by this picture’s nightmarish, child’s-eye view of an alien invasion, in this U.S. premiere of a new restoration. (d. William Cameron Menzies, 78m, Digital)