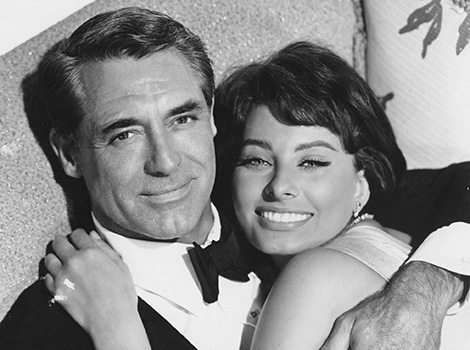 Cary Grant and Sophia Loren make a delightful romantic couple in this charming comedy. He’s a widowed diplomat estranged from his three young children. She’s the rebellious daughter of a controlling symphony conductor. They meet-cute when she finds one of his children, who has run away. Before long, she’s working as his maid on a leaky houseboat after his home is accidentally wrecked. She can’t make coffee, but she makes the children love her, and it isn’t long before he does too. The on-screen joy, however, masked a troubled production. The script had been written by Grant’s wife, Betsy Drake, as a vehicle for the two of them. When Grant went off to Spain to make The Pride and the Passion (1957), he fell in love with leading lady Loren and insisted she take over the lead role here—only to see her marry film producer Carlo Ponti during production. Writer-director Melville Shavelson wound up refereeing between his two stars, as Grant took out his frustrations on everyone in sight. But in those pre-internet days, the audience had no idea about the troubled shoot and flocked to see the film. (d. Melville Shavelson, 110m, Digital)