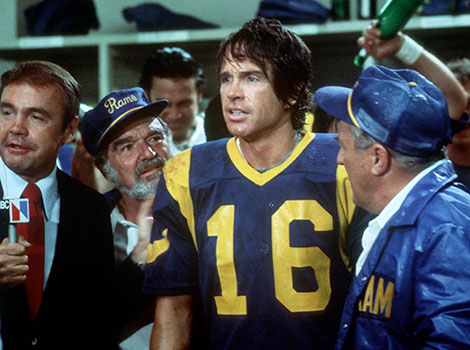 A love story, a murder mystery, an outrageous farce, a spiritual fantasy, and a sports film—Warren Beatty and Buck Henry’s remake of Here Comes Mr. Jordan (1941) has something for everyone. Before embarking on his dream project, Reds (1981), Beatty was looking for a way to get some directing experience. A character-driven comedy seemed the perfect choice, so he latched onto the tale of a boxer killed by a clerical error in heaven and brought back as a murdered business tycoon. Since he knew little of boxing but had played football in high school, Beatty turned the lead into a member of the Los Angeles Rams. With Henry on hand to codirect, Elaine May as cowriter, and a cast including Julie Christie, James Mason, Dyan Cannon (hilarious as the tycoon’s cheating wife), Jack Warden, and Charles Grodin, he produced a genuine crowd-pleaser. He also became the first person to earn Oscar nominations for producing, directing, writing, and starring in a single film—a feat he would repeat with Reds. (d. Warren Beatty & Buck Henry, 101m, Digital)