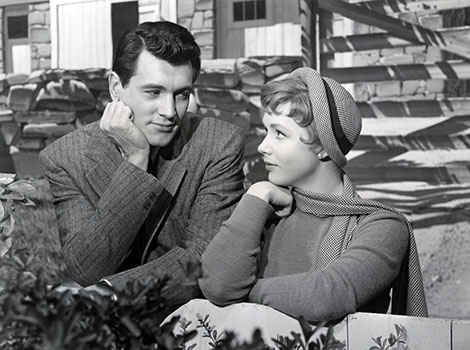 The twenties don’t so much roar as purr in this charming comedy from director Douglas Sirk, now celebrating its 70th anniversary. Charles Coburn stars as a bachelor millionaire who wants to find out if the family of the woman who rejected his proposal decades ago deserve to inherit his money. He boards with them under an assumed name and arranges for them to receive an unexpected windfall. Their reactions, most notably in a disastrous Christmas party sequence, foreshadow the social critique Sirk would master in later films like Imitation of Life (1959). This picture is gentler, however, finding the humor in its small-town setting and the romance between elder daughter Piper Laurie and soda jerk Rock Hudson. The two even get to sing a chorus of “Gimme a Little Kiss (Will Ya, Huh?).” The rest of the cast includes Gigi Perreau as Laurie’s younger sister, Lynn Bari as her social-climbing mother, and an uncredited James Dean as a soda fountain customer. (d. Douglas Sirk, 88m, Digital)