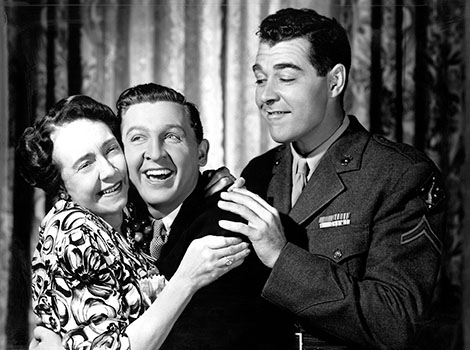 Writer-director Preston Sturges’s favorite of all his films—or as he put it, “the one with the least wrong with it”—takes on patriotism, heroism, and motherhood. Sturges had so loved working with Eddie Bracken on The Miracle of Morgan’s Creek (1944), he gave him the lead in his next film. Here, Bracken is a 4F tormented by his mother’s adulation of his war hero father. Rather than admit he’s been drummed out of the Marines for hay fever, he gets a job away from home until a troop of actual war heroes decide to accompany him back to his hometown. As in all of Sturges’s comedies, the action is fast paced, the dialogue overlaps, and the punch lines come at you so fast you’re almost afraid to laugh for fear of missing one. He also makes terrific use of his unofficial stock company, including William Demarest, Georgia Caine, and Franklin Pangborn as the harried official in charge of Bracken’s homecoming celebration. (d. Preston Sturges, 101m, Digital)