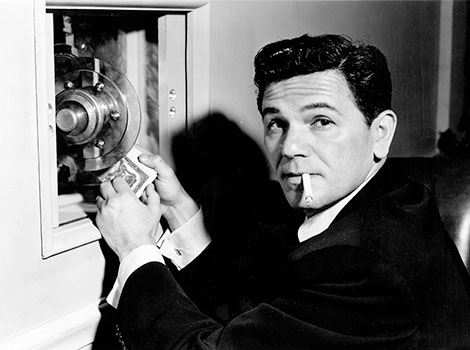 Film noir often served as a critique of corruption in America. Few films, however, went as far as Force of Evil in laying the source of corruption at the feet of capitalism. John Garfield stars as a lawyer for the mob boss (Roy Roberts) who runs the numbers racket. His brother (Thomas Gomez) runs a smaller operation, and Garfield’s efforts to make his boss richer while also protecting his brother fill the film with moral ambiguity. This was writer Abraham Polonsky’s sole directing credit before he was blacklisted. Garfield had encouraged him to move into directing after starring in Body and Soul (1947), based on Polonsky’s script. Working with novelist Ira Wolfert, Polonsky combines the tough crime story with dialogue bordering on blank poetry. He instructed cinematographer George Barnes to use Edward Hopper’s paintings as inspiration in filming the New York locations, which take on a new life in this UCLA restoration funded by The Film Foundation. In 1948, critics didn’t get the film’s original style, but it has come to be viewed as one of America’s greatest films, with Martin Scorsese hailing it as a key influence on his work. (d. Abraham Polonsky, 79m, Digital)