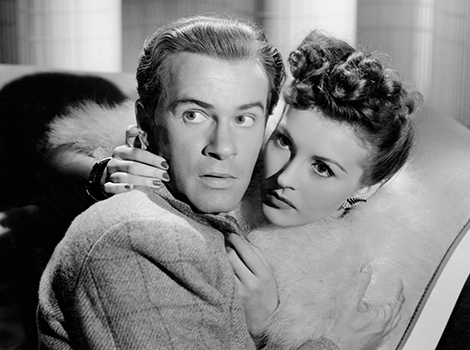 Filmed two years before director Robert Siodmak made his first true noir film, Phantom Lady (1944), this comic thriller—now celebrating its 80th anniversary—is less noir than noir-adjacent. A young intern (Richard Carlson) tries to help an escaped mental patient (Martin Kosleck), only to end up on the run as a suspect after the man is murdered. He kidnaps an artist (Nancy Kelly) to help him out, leading to a series of comedic and suspenseful incidents as they uncover a Nazi spy ring. That last element made the film particularly timely on its release, just a month after the Japanese attack on Pearl Harbor and the U.S. entry into World War II. This was only Siodmak’s second Hollywood film. The director had built a promising career in his native Germany, where he had worked on stage and screen with Fly-by-Night costars Albert Bassermann and Kosleck. Although he fled to the U.S. after the rise of Hitler, the influence of his German period is particularly strong in his noir films like The Killers and The Spiral Staircase (both 1946). (d. Robert Siodmak, 74m, 35mm)