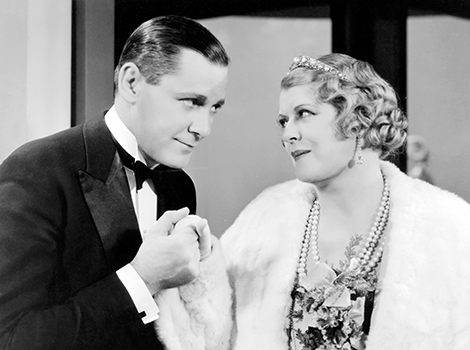 Released shortly after the more famous Trouble in Paradise (1932), Evenings for Sale comes from that brief period when Herbert Marshall was a romantic leading man. Before moving on to playing wronged husbands, neglected suitors, and character roles, Marshall starred here as a penniless Austrian count on the verge of suicide. He’s pulled out of it by falling in love with a businessman’s daughter (Sari Maritza) and the chance to work as a gigolo at a café run by his former butler. There he meets a wealthy American (Mary Boland) with dreams of living out The Merry Widow in real life. Because this is a pre-Code picture, Maritza gets to doff one of her glamorous Travis Banton gowns on camera and the discussion of Marshall’s relationship with Boland gets franker than it would have been a few years later. The film’s beautiful leading lady, Maritza, was one of several European actresses imported to compete with Greta Garbo and Marlene Dietrich. Adding to the film’s luster is a new pinkish film stock cinematographer Harry Fischbeck used for the first time to make the film’s whites clearer than in previous films. (d. Stuart Walker, 61m, 35mm)