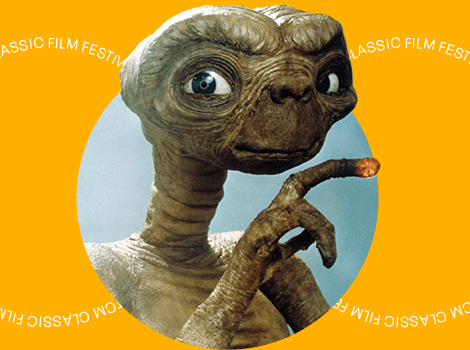 It’s been 40 years since phoning home and flying bicycles became part of our collective movie culture. The film that surpassed Star Wars (1977) to become the top-grossing picture of all time (now ranking fourth when adjusted for inflation) celebrates its 40th anniversary and returns to the big screen in its original theatrical release version as the official Opening Night film of the 2022 TCM Classic Film Festival.

Celebrated for its Oscar-winning special effects, sweeping musical score, and rich emotional palette, E.T. the Extra-Terrestrial began as a highly personal project for director Steven Spielberg. After his parents’ divorce, a teenaged Spielberg conceived an imaginary friend – an alien – to help cope with loneliness. Twenty years later, and far from home during location shooting for Raiders of the Lost Ark (1981), he was inspired to turn his childhood memories into a film. Helping to bring his vision to life were screenwriter Melissa Mathison, along with two longtime collaborators: producer Kathleen Kennedy and production supervisor Frank Marshall.

At the center of E.T. is Elliott (Henry Thomas), a ten-year-old child of divorce who discovers an odd-looking alien, left behind by his family in the forests of California, and brings him home. E.T.’s presence leads to a series of sometimes comic, sometimes frightening adventures, and – perhaps most unexpectedly for Elliott – deep empathy and friendship.

Key to the success of E.T. is the animatronic wizardry of special effects artist Carlo Rambaldi, who designed a creature that managed to be both otherworldly and sympathetic, as well as cinematographer Allen Daviau, who photographs the complexities of the suburban world through a child’s eyes. Perhaps the most significant contribution comes from composer John Williams, who scores the emotional beats of the film with wonder, mystery, and exhilaration. Rounding out the cast are Dee Wallace and Peter Coyote as well-meaning adults, along with an extraordinary group of young actors including Robert MacNaughton and Drew Barrymore in her first major film role.

As E.T. tells Elliott, while pointing a glowing finger toward the boy’s mind, “I’ll be right here.” So, too, do cherished memories of E.T. the Extra-Terrestrial live on in the imagination of all who see it.