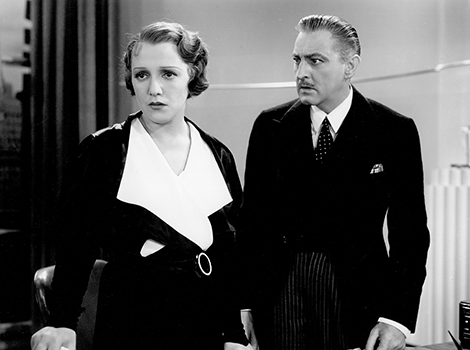 Leonard Maltin, this year’s recipient of the Robert Osborne Award, personally chose this William Wyler-directed pre-Code drama to screen for his award ceremony. After cutting his teeth directing low-budget Westerns, Wyler moved into prestige productions with this adaptation of Elmer Rice’s hit play. Universal paid a then-high $150,000 for the screen rights to the tale of a lawyer from the slums whose rise to power is threatened by his wife’s infidelity and an ethical lapse in his past. When Paul Muni declined to recreate his stage role, the studio went against type and cast John Barrymore to deliver what critics have called his only performance in a talking film to capture the magic that had made him a legend on stage. Wyler pulled off some impressive long takes, having the camera move gracefully with the actors to underline the action. The supporting cast includes Doris Kenyon, Melvyn Douglas, Bebe Daniels, Thelma Todd, and future directors Vincent Sherman and Richard Quine. (d. William Wyler, 82m, 35mm)

Warren Beatty will be presenting the Robert Osborne Award to Leonard before the screening.