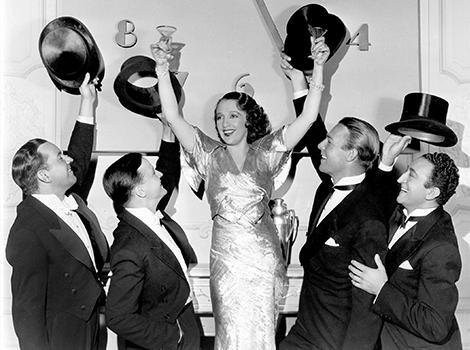 One element of pre-Code films that particularly irked moralists was their presentation of independent women who approach sex and romance the way men do. Characters played by Ruth Chatterton, Barbara Stanwyck, and Mae West often practiced a policy of “love them and leave them.” In Cocktail Hour, Bebe Daniels aspires to join their ranks. She plays an artist who refuses to give up her career to marry her boss (Randolph Scott). Instead, she takes off on an Atlantic cruise where she gets involved with an amorous prince (Barry Norton) and a notorious philanderer (Sidney Blackmer). The career of director Victor Schertzinger is ripe for reappraisal. The one-time child violin prodigy started directing with silent comedy shorts. With the coming of sound, he often wrote songs and even entire scores for his films, as he did with Cocktail Hour. He later directed the first two Road films (Singapore in 1940 and Zanzibar in 1941) with Bob Hope and Bing Crosby. (d. Victor Schertzinger, 73m, Digital)