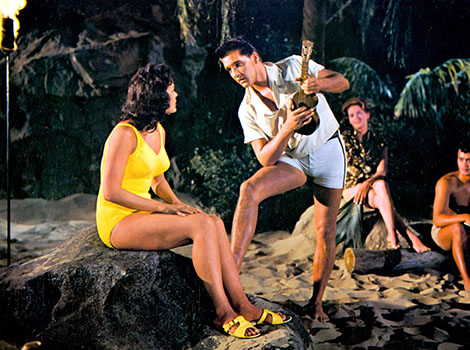 Grab a seat by the pool as Elvis Presley takes his first on-screen trip to the Aloha State. Blue Hawaii did so well Presley’s manager, Colonel Tom Parker, made it the template for most of the King’s later movies. From then on, Elvis was frequently sent to exotic locations, surrounded with pretty girls, and given enough songs to fill two sides of an LP. Producer Hal Wallis capitalized on Presley’s recent stint in the Army by casting him as a G.I. returning home to Hawaii. Defying his rich mother (Angela Lansbury, only ten years older than Presley in real life), he gets a job as a tour director and falls into a series of romantic complications with his first tour group, a class of high school girls. The film gave Elvis what would become the closing number at all his future concerts, “Can’t Help Falling in Love,” and the soundtrack became one of the bestselling albums of the decade. (d. Norman Taurog, 101m, Digital)

For this Hawaiian-themed screening, we encourage attendees to dress up in Hawaiian shirts or tropical attire!