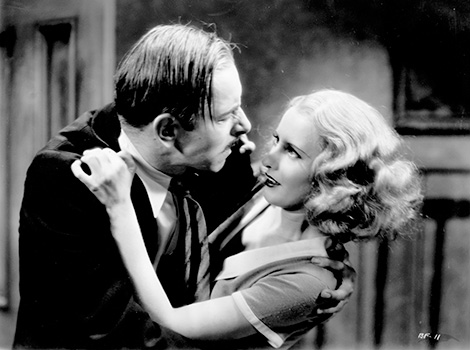 In one of the movies that best define the pre-Code era (made before the enforcement of Hollywood’s strict Production Code), Barbara Stanwyck stars as tough, tough cookie Lily Powers, who—after fleeing her father’s Erie, PA, dive bar/brothel—sleeps her way to the top of a New York bank. Baby Face became even more pre-Code in 2004, with the Library of Congress’s accidental discovery of the never-before-seen, uncensored pre-release version: the jaw-dropping, sexually frank version that was too steamy even for 1933. Along with one of Stanwyck’s most powerful early performances, Baby Face was decades ahead of its time with the casting of African American actress Theresa Harris (who played mostly maids in her long career) as Chico, Lily’s inseparable best friend. Other cast highlights include George Brent, Douglass Dumbrille, and, as one of Lily’s marks, a rare early non-Western appearance by John Wayne. Following the movie, comparison footage and Production Code records will show how this pre-release cut was “sanitized” for general release. (d. Alfred E. Green, 76m, 35mm)