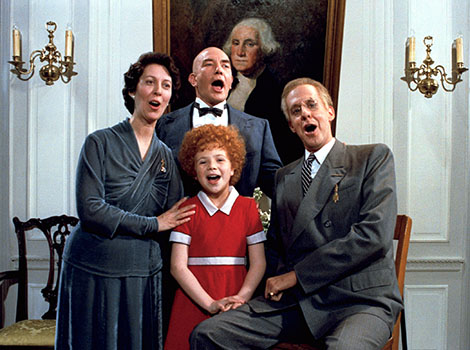 The sun has been coming out tomorrow for the past 40 years. In 1977, Columbia paid a record $9.5 million for the screen rights to the smash hit musical based on Harold Gray’s long-running comic strip and then spent five years getting it on screen. Aileen Quinn beat out a wide field to play the plucky redhead who escapes the orphanage run by the evil Miss Hannigan (Carol Burnett) to find happiness as the adopted daughter of business tycoon Oliver “Daddy” Warbucks (Albert Finney). Producer Ray Stark wanted to toughen up the property, so he hired John Huston to direct. He would have cast him as Warbucks, too, but at 75 years of age, Huston was a little too old for the part. Instead, Finney modeled his performance on the director. The studio lavished $35 million on the production, and though it was one of 1982’s highest-grossing films, Annie failed to make back its investment. More recently, critics have drawn thematic connections to Huston’s other films, making the title character the youngest in his gallery of dreamers. (d. John Huston, 128m, Digital)