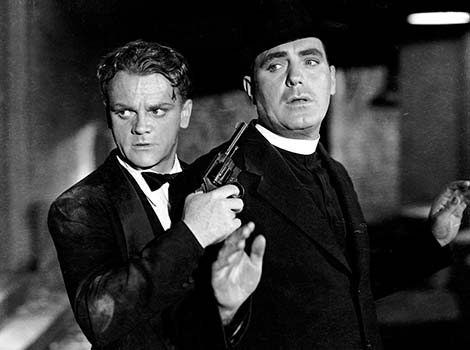 One of James Cagney’s best performances comes to life as never before in the theatrical premiere of a new restoration of this gangster classic. Angels with Dirty Faces traces the different lives of childhood friends Rocky Sullivan (Cagney) and Jerry Connolly (Pat O’Brien). An early crime ends with Rocky caught and sent to reform school, while Jerry escapes. Years later, Rocky is a hardened gangster while Jerry has become a priest. Caught between them is a group of street toughs (the “Dead End Kids”) that Jerry is trying to reform, though they idolize Rocky. Cagney based his characterization on a drug-addicted pimp he had known growing up on New York’s Lower East Side. The distinctive mannerisms differentiated his character from other gangsters he’d played while also giving impressionists a meal ticket for years to come. He received the New York Film Critics Circle Award and an Oscar nomination for Best Actor. The film’s young actors, including Leo Gorcey and Huntz Hall, were so popular they would star in four more Warner Bros. films before morphing into the East Side Kids and the Bowery Boys at Monogram. (d. Michael Curtiz, 98m, Digital)