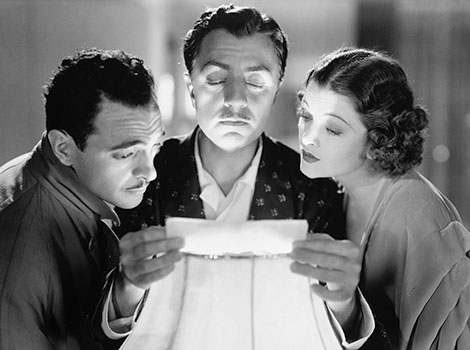 The second Thin Man film, starring William Powell and Myrna Loy as Nick and Nora Charles, set a pattern that would distinguish their films from other series. Unlike the Andy Hardy and Dr. Kildare features, which were shot inexpensively and quickly, with two or more released in a year, MGM waited two years before producing a sequel to its surprise success The Thin Man (1934). Along with Powell and Loy, the studio brought back director W.S. Van Dyke and married writing team Frances Goodrich and Albert Hackett. As a result, the sequel—which tells of a visit to Nora’s family that sets Nick on the trail of her cousin’s missing husband—maintains the same wit and fast pace as its predecessor. One thing the Thin Man films shared with MGM’s other series was their usefulness in showcasing new talent. In this case, James Stewart, who had joined MGM just a year earlier, turns up as the cousin’s former suitor, a role wildly different from the down-home good guys he would play after he became a star. (d. W.S. Van Dyke, 113m, Digital)