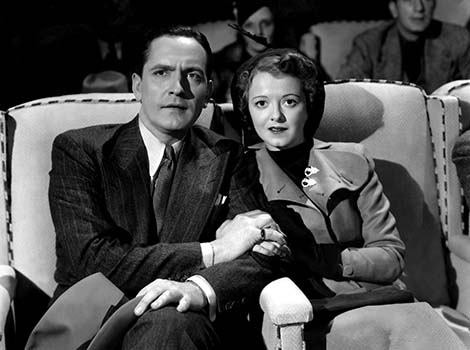 One of the earliest feature films shot in three-strip Technicolor gets a fresh look in this theatrical premiere of a new restoration. Since Warner Bros. failed to renew its copyright in 1965, the film has been circulated in badly deteriorated versions that don’t do justice to the original vision of producer David O. Selznick, director-screenwriter William A. Wellman, and cinematographer W. Howard Greene. This is the first telling of the heartbreaking love affair of fading film star Norman Maine (Fredric March) and rising newcomer Esther Blodgett/Vicki Lester (Janet Gaynor). Hollywood insiders have long debated on the inspiration for the two characters, citing actors like John Gilbert and John Barrymore and leading ladies like Colleen Moore and Barbara Stanwyck. The scene in which fans mob Gaynor at March’s funeral is eerily similar to what happened to Norma Shearer when husband Irving G. Thalberg died, just before A Star Is Born went into production. Oddly, stars March and Gaynor were at the opposite ends of their career cycles from their characters, with March at the height of stardom and Gaynor giving one last great performance before her star faded. (d. William A. Wellman, 111m, Digital)