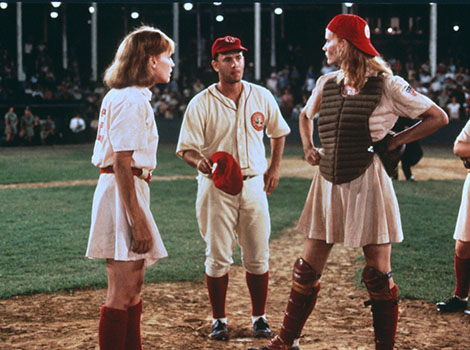 Three decades ago, a reunion of the All-American Girls Professional Baseball League led to the making of this comedy hit about the formation of one legendary team, the Rockford Peaches, with Geena Davis and Lori Petty playing sisters and star players. Director Penny Marshall was inspired by the similarly titled 1987 TV documentary about the League, whose producer, Kelly Candaele, was the son of Helen Callaghan, one of its leading players and the model for Davis’s character. The production was a reunion for Marshall and several of the actors. Tom Hanks, who plays the team’s churlish coach, had starred in her hit 1988 film, Big. She also gave roles to her brother, Garry Marshall; her daughter, Tracy Reiner; her niece, Kathleen Marshall; and former Laverne & Shirley costars David L. Lander and Eddie Mekka. Although Davis was a late addition, missing baseball training with her costars, she soon became one of the cast’s best players. (d. Penny Marshall, 128m, Digital)